At geological timescales, the Earth’s surface is now seen as the interface between the Solid Earth (lithosphere, mantle, core) and the Fluid Earth (hydrosphere, atmosphere, biosphere). Its shape results from interior deformations and erosive processes associated with climate changes. In response to deformation, the Earth’s surface is formed of zones of lithospheric uplifts with high reliefs such as mountain belts dominated by erosion and sediment production: the “Sources”, which transfer sediment to low relief areas of lithospheric subsidence, which form sedimentary basins dominated by deposition: the “Sinks” (see the figure). 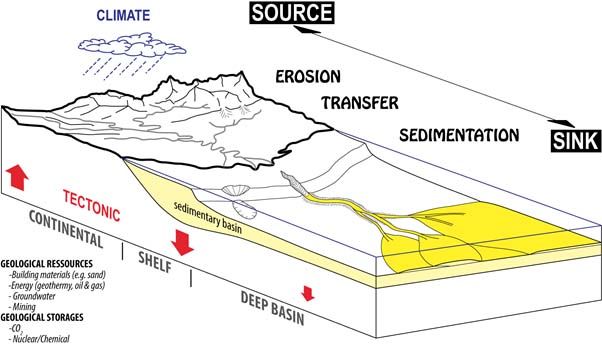 The scientific objectives of S2S-FUTURE are to understand, quantify and model the sediment routing system from the sediment production (source) to the sediment deposition (sink); its tectonic and climatic controls; and to establish generic rules for a full understanding of signals propagation in S2S systems for building predictive models of sediment location and characteristics. These studies of S2S systems require interdisciplinary approaches combining geomorphology, sedimentology and stratigraphy, geochemistry, tectonic and paleoclimatology coupling observations, quantifications and process modelling.

The main ambitions of S2S-FUTURE are:

S2S-FUTURE project gathers an outstanding European research and training network of 15 PhD students, hosted at world-leading academic institutions and industrial companies, whose aim is to develop the S2S paradigm as a powerful vector for understanding sedimentary accumulations as natural resources.

The project has received funding from the European Union's Horizon 2020 research and innovation programme under the Marie Sklodowska-Curie grant agreement No 860383.